Cinco de Mayo (Spanish for “Fifth of May”) commemorates the 1862 Mexican victory in the Battle of Puebla, in which the greatly outnumbered Mexican side defeated the French army. Although the French would go on to crown an emperor of Mexico (yes, really) in 1864, the victory at Puebla had galvanized the Mexicans, and they struck back, ousting the emperor in 1867.
Today, the celebration of Cinco de Mayo has spread to the US, and while many American revelers remain oblivious to Cinco de Mayo’s history, most probably know even less about the name origins of the popular Mexican and Mexican-American dishes (and, of course, one drink) that are often consumed in celebration.
So let’s dig in to some crazy delicious etymologies.

Don’t worry, we won’t charge you extra for this etymology. The Nahuatl word āhuacamolli, from which “guacamole” derives, explains exactly what you’re dipping your tortilla chips into. Āhuacatl means “avocado,” while mōlli means “sauce” or “paste”—and is also where the rich, dark sauce known as “mole” gets its name.

Nachos are named in honor of the man believed to be their creator, Ignacio Anaya—whose nickname, like many other Ignacios, was “Nacho.” The story goes like this: on one fateful night in 1943, Anaya, then working as a maître d’ at a restaurant in a Mexican border town, had a large party to serve and no chef at his disposal. So he made a dish himself: tostadas topped with melted cheese and jalapeño pepper slices. The dish, initially called Nacho's especiales ("Nacho's specials"), was a big hit. It eventually crossed the border into Texas and then spread through the US, thanks, in part, to American sportscaster Howard Cosell, who began to use the word in his commentary. Anaya died in 1975, but his creation continues to be a staple at cantinas, stadiums, movie theaters, and just about every snack stand.

If you peck away at the name of everyone’s favorite chunky salsa, pico de gallo, you’ll end up with (literally) “beak of the rooster.” Because pico de gallo consists of chopped tomatoes, onions, peppers, and cilantro, the name might refer to the rooster’s ability to break food into smaller pieces by pecking it with its beak—but no one seems to know for sure.

If the word chimichanga sounds made up, that’s because it is. It’s similar to the English placeholder words “thingamajig” and “whatchamacallit.” In fact, chimichanga comes from the American Spanish word chivichanga, meaning something like “trinket.”

Have you ever finished a burrito and felt like you've eaten a small donkey? Well... “burrito” is a diminutive form of “burro”—a small donkey, especially one used for carrying loads. So what does a filled, folded tortilla have to do with a donkey? No one knows for sure, but one possible explanation is that the wrapped-up burrito resembles the packs a donkey would carry. Or the name might refer to how a burrito and a donkey both can hold many things at once.

The perfect accompaniment to Mexican fare? The margarita, a cocktail consisting of tequila, orange liqueur, and lemon or lime juice that is commonly served in a glass with a salted rim. But if you thought its name had something to do with its contents, guess again—in Spanish, the word margarita means “daisy.” This name might have been influenced by an earlier cocktail called the “magnolia,” but take that with a grain of salt.

If you mine the etymology of the word “taco,” you’ll find that its origin is not definitively known. But one theory associates it with Mexican silver miners. In Spanish, tacos might have been originally called tacos de minero—literally "miner's plugs” (with taco meaning “plug”). At one time, miners would use explosive charges that were simply loose gunpowder wrapped in paper—not unlike the taco’s loose fillings wrapped in a tortilla. The taco’s explosive popularity? Just a coincidence.
Don’t wait till Taco Tuesday to explode your friends’ minds with your new taco knowledge!
Get all volumes of The Farlex Grammar Book in paperback or eBook.

Share Tweet
Secrets of the Sauce: 8 condiment names explained Down in History: 11 names remembered for all the wrong reasons 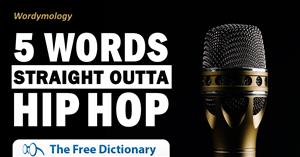