I before E: 21 spelling rules (and their crazy exceptions!)

English has many spelling rules and exceptions, which can make learning how to spell a challenge. In this article, we break down some of the most common spelling rules, including those based on what is being added to the beginning (a "prefix") or the end (a "suffix") of a simple word (also known as a "root word").
Take the word "kind," for instance. It can be joined with the prefix "UN-" to form "unkind," or with the suffix "-NESS" to form "kindness."
We have categorized prefixes and suffixes based on how they change the root word. Rules that impact the spelling in the middle of a word have been grouped together in the "Miscellaneous" section at the end of the article.

A prefix is a part of a word attached to the front of it to produce a derivative word or an inflected form.

Prefix + root word
Many root words are like "unkind" and do not change their spelling when a prefix is added.

The prefix "all-" loses its second L when added to the root word.

A suffix is a part of a word added to the end of it or its stem, serving to form a new word or functioning as an inflectional ending.

For many words in the English language, you simply need to add an -S to the end in order to make them plural.

Words that end in a Y that is preceded by a consonant need to be changed to end in -IES when they are made plural.

Words that end in a Y that is preceded by a vowel just need an -S at the end to become plural.

6. Endings that hiss need an -ES

The letter combination CH that is pronounced like a K simply gets an -S.
stomach + S = stomachs
monarch + S = monarchs

For most words ending in a single F, you must change the final F to a V before you can add the plural "-ES" ending.

Nouns ending in O get an -S or -ES suffix to become plural.

9. Some words keep their Latin or Greek plural endings

What is the plural of "octopus"?

The plural of "octopus" can be either "octopuses" or "octopi." The same goes for "cactus" ("cactuses" or "cacti") and hippopotamus ("hippopotamuses" or "hippopotami").

The silent E at the end of many words needs to be dropped before suffixes beginning with vowels (e.g. -ING, -ED, -ABLE, -IBLE) can be added.

Words ending in -GE or -CE, however, often keep the -E when suffixes that start with vowels are added. (The E helps indicate that the G or C sound will remain soft.)

For many words, the Y ending must change to I when a suffix is added.

wry > wryly
shy > shyly
"Dry" can follow the rule or be an exception: "drily" or "dryly."
Verbs that end in Y keep the Y when -ING is added:
cry > crying
apply > applying

The suffix -FUL shows that the root word is full of something... just not Ls: -FUL always has just one L.

Adding -LY to the end of words makes them into adverbs.

Double the last consonant if the word has one syllable and one vowel followed by one consonant.
win + ing = winning
split + ing = splitting
big + er = bigger
In multi-syllabic words, double the final consonant if the last syllable is stressed.
admit + ed = admitted
occur + ence = occurrence

Some spelling rules don't fall under any one category.

Perhaps the best known mnemonic device for an English spelling rule, the full rhyme goes:
I before E except after C
Or when sounded as A
As in "neighbor" or "weigh."

Examples: I before E

Examples: Except after C

I before E exceptions

17. When two vowels go walking, the first one does the talking

Another popular rhyme: When two vowels go walking (appear together), the first one does the talking (is the sole, dominant sound).

Q is almost always followed by U in English words.

As all Scrabble players know, Q can be used without U in some words.
You can find them all here: Q words without U

For singular words, an apostrophe S ('S) is added to the end to show possession.

Different style guides differ about whether to use an apostrophe S after a proper name ending in S, such as James or Jesus.
Some recommend adding an apostrophe S for some "common" proper names (Charles's), but not Biblical names (Jesus'). Some say that all names should take an apostrophe S (Jesus's), while others says that names ending in S should only take an apostrophe. Still others take into account how many sibilant (S) sounds the word has when determining whether to add an S after the apostrophe. Many guidelines reflect the way the word is often pronounced (Jesus' = Jee-zus, not Jee-zus-iz). Check with your preferred style guide to see its recommendation.

The two cats' bowls are empty.
Our parents' cars are in the garage.

For plural words that do not end in S, simply add an apostrophe S ('S):
children's
What exceptions did we miss? What is your biggest spelling challenge?
Get all volumes of The Farlex Grammar Book in paperback or eBook.

Share Tweet
What rhymes with orange? And 8 other burning language questions The 7 Major Differences between British and American Spelling 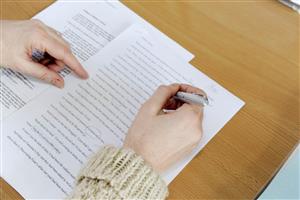