How 9 different fruits came to be named after the apple

Did you have any idea how many different fruits are actually named after the apple? Let’s explore some of these juicy etymologies.

The English word “peach” has its roots in the Latin phrase Persicum mālum, literally meaning “Persian apple.” This phrase is a bit of a misnomer, though, because the peach probably originated in China. Persia may be emphasized in the Latin name because the Romans most likely had access to the peach only after it had reached Persia.

The pomegranate is known for its many seeds, and that fact did not escape speakers of Medieval Latin, who called it pōmum grānātum—literally, “seedy apple.”
You can find seeds of the name “pomegranate” in the etymologies of several seemingly unrelated things, such as the grenade (named for its resemblance in shape to the pomegranate) and grenadine (a syrup made from pomegranate juice).

It’s not an apple, and it doesn’t grow on a pine tree, so where does the pineapple get its name? “Pineapple” comes from the Middle English term pineappel, a word once used for what we would call a pinecone (the idea being that it was the “fruit” of the pine tree). That name was then applied to what we now call a pineapple likely just because of the resemblance of its rough, spiny covering. (Kind of like how the grapefruit was so-named probably just because it grows in clusters, somewhat like grapes. F for creativity, fruit namers.)

The Apple of the Orange Tree

The orange first existed in Asia, but it only became the “orange” after some etymological evolution. The first stop on this journey was India, as “orange” ultimately has its roots in words from the Dravidian language family, which includes languages spoken in India and Sri Lanka. In ancient times, a Dravidian word similar to nāram—the modern Tamil word for “orange”—was adopted into the Indo-European language Sanskrit as nāraṅgaḥ.
As the fruit traveled from India, it picked up several new names, such as the Persian nārang and Arabic nāranj. Arabs then introduced the orange to Europe between the 8th and 10th centuries.
The Arabic word nāranj is the source of Old Italian arancio, “orange tree,” and this word was combined with the Old Italian word mela, “apple,” to make melarancio. This word literally means “apple of the orange tree,” an idea that carried through to Old French, in which pume d'orenge meant the same thing. (It seems they had no problem mixing apples and oranges back then!) The “a” in the Old Italian word might have been replaced by an “o” in French either in reference to the French town of Orange, or due to the French word or, “gold”—referencing the fruit’s color.
Speaking of that color, it wasn’t until the 16th century rolled around that the English word “orange” became synonymous with the color orange. Orange you glad you can now tell your friends that the fruit came before the color?

The word “melon” is short for Latin mēlopepō, from Greek mēlopepōn. This word combines mēlon, meaning “apple,” with pepōn, meaning “gourd,” perhaps because the melon has a hard rind like a gourd.
The melon isn’t the only member of the gourd family with a name that links to the apple, though—there’s also the colocynth, a fruit that has been dubbed the “bitter apple,” thanks to its unpleasant-tasting pulp.

The Apple of Cydonia

The quince, a seeded fruit commonly used in preserves, has been cultivated in the Mediterranean region since ancient times. It’s not surprising, then, that the name “quince” comes, through much alteration, from mêlon Kydṓnion, a Greek phrase meaning “apple of Cydonia” (Cydonia was a city in ancient Greece). Unlike some of the other fruits we’ve mentioned, the quince actually bears a resemblance to the apple, but has a very acidic taste.

The Apple of Love...

The tomato is thought to have gotten this lovely nickname from the translation of the French phrase pomme d’amour, literally “apple of love,” which comes from the belief that the tomato could be used as an aphrodisiac. The “love apple” was at one time grown just for ornament.

Forget the debate about whether the tomato is a fruit or a vegetable—is it an apple or a peach? And not just any old peach: the genus name for the tomato is Lycopersicon, which combines the Greek words lukos, “wolf,” and persikon, “peach.” The name likely harkens back to the once widespread notion that the tomato is poisonous. (Indeed, the plant is a member of the nightshade family and all parts other than the fruit are in fact toxic.)

What about the pome?

“Pome” is the general name for a type of fleshy fruit that has several seed chambers. We’ve actually already discussed two fruits that are considered pomes—the apple and the quince. The word “pome” comes from the Late Latin word pōma, meaning, what else, “apple.” Relatedly, the French word for “apple” is pomme and also lends its name to other non-apple apples, like the pomme de terre—or potato—literally meaning “apple of the Earth.” So, next time you see pommes frites on a French menu, know that you’re not ordering fried apples.
If you liked them apple facts, go ahead and share them with the apple of your eye!
Get all volumes of The Farlex Grammar Book in paperback or eBook.

The origins of tea and coffee names.
Read next 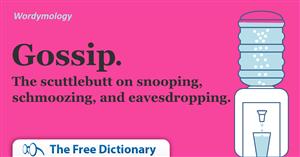 How gossip got its name
Feedback
Trending