You might know that the weird, wonderful word “Halloween” is an abbreviated form of “Allhallow(s) Even,” the eve of All Saints’ Day (also called “Allhallows”). But we’ve scared up even more Halloween word fun, so gather round while we treat you to the tricky etymologies of these essential Halloween words.

To carve out the etymology of “jack-o'-lantern,” we have to start with its original meaning. Before it became the name for a carved pumpkin with a light inside, it referred to a mysterious phenomenon called ignis fatuus (literally “foolish fire”), a glowing light sometimes seen above swamps or bogs that is thought to be caused by spontaneous combustion of gases. The eerie light is sometimes called a will-o’-the-wisp—from “Will of the wisp” (“Will” being a name and a wisp being a torch)—or, using the same pattern, a jack-o’-lantern—“Jack of the lantern.”

If you toil and trouble over the etymology of the word “witch,” you’ll find that it’s related to the Middle Low German word wicken, meaning “to conjure.” But it has more immediate roots in the Old English words wicce (“witch”) and wicca (“wizard” or “sorcerer”)—which is also where the Neopagan religion Wicca derives its name.
When witches get together, it’s called a coven. The root of “coven,” covent, means—and is also the root of—“convent.” Now that scary nun movie makes a lot more sense.

Witches and vampires may have more in common than being popular Halloween costumes. The name of everyone’s favorite nocturnal bloodsucker comes from the German word Vampir and might be related to the Turkish word uber—meaning “witch.”

Much like the witch hiding inside the word “vampire,” there’s a skeleton hiding… INSIDE YOU RIGHT NOW! Sorry, where were we? The word “skeleton” gets its bones from the Greek phrase skeleton sōma, meaning “dried-up body.”

Speaking of old, shriveled-up corpses, if you unravel the etymology of “mummy,” you’ll see that it comes not from something monstrous, but medicinal. The term can be traced back to the Arabic word mūmiyā', a name for a kind of resin once harvested from mummies and used as a kind of medicine.
As for that favorite haunt of the mummy, the sarcophagus? Well, that’s not so friendly. Its ultimate source is a Greek word meaning “flesh-eating.” Formed from the roots sarx ("flesh") and phagein ("to eat"), it most likely refers to the stone used in some coffins that was believed to accelerate decomposition.

From flesh eaters to brain eaters: the English word “zombie” has stayed similar to the Louisiana French Creole and Haitian Creole word it derived from: zonbi. It’s also related to nzúmbi, which means “ghost” or “spirit” in Kimbundu, a language spoken in Angola.
“Zombie” isn’t just used for reanimated corpses—it’s also the name of a Voodoo snake god.

Enough of all this snacking on brains and flesh, let’s get to the best part of Halloween: the candy.
Although the very similar word candi was used in both Middle English and Old French, “candy” is ultimately Arabic in origin. It comes from the Arabic phrase sukkar qandī, in which sukkar means “sugar” and qandī comes from qand, meaning “lump of sugar.”
Now that we’ve loaded you up with all the best Halloween word candy, don’t forget to share!
Get all volumes of The Farlex Grammar Book in paperback or eBook. 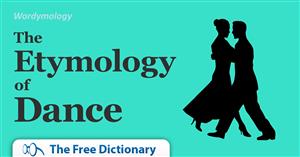 The Etymology of Dance
Feedback
Trending