Meet nine women whose names and creations live on in our words.

Before there was “Becky with the good hair,” there was Jeanne Antoinette Poisson, a French noblewoman better known as the Marquise de Pompadour—and mistress of French King Louis XV. She’s credited with originating the pompadour hairstyle all the way back in the 1700s! In those days before Bumpits, a pad (sometimes, horrifyingly, called a “rat”) was commonly used to create a pompadour with greater height. Pompadour wasn’t only a style icon—she also wielded significant influence over Louis XV.

We all know pizza is fit for a queen. But it really was, for one in particular: Margherita of Savoy, queen of Italy from 1878 to 1900. According to some accounts, she enjoyed such pizza during an 1889 visit to Naples, with said pizza perhaps having been created especially in her honor (the margherita pizza’s toppings—basil, mozzarella, and tomato sauce—mirror the colors of the Italian flag). Either way: yasss queen, eat that za!

“Apgar” sounds like an acronym, but the Apgar Score was actually the baby of Virginia Apgar, a 20th-century anesthesiologist who developed the criteria to evaluate the overall health of newborns immediately after birth. Her eponymous score assesses a newborn’s heart rate, breathing, muscle tone, skin color, and response to stimuli. A maximum of two points can be awarded for each area, with a perfect score being 10.
Do you know what your Apgar score was? (If you ask your mom, she’ll probably say it was a 10.)

Back in the 19th century, before looks were lewks and when pants were only commonly worn by men, American activist Amelia Jenks Bloomer began to wear a short skirt with full trousers. She further promoted and defended her attire in the Lily, the temperance and women’s rights journal that she founded and edited. Due to Bloomer’s efforts to wear and popularize the “Bloomer costume,” her name became attached to it, and “bloomers” were born.

“Granny Smith” might seem like a generic name, but the tart variety of apples is in fact named for a real person: Maria Ann Smith. Smith, an orchard owner and fruit cultivator known by the nickname “Granny,” is credited with first producing the variety near Sydney, Australia, in the 19th century.

Introverts and extroverts alike have a mother-daughter duo to thank for the Myers-Briggs personality test: researcher Katharine Cook Briggs and her daughter Isabel Briggs Myers (yes, Isabel’s last name was “Briggs Myers”). Introduced in 1942, the Myers-Briggs Type Indicator is based on Carl Jung’s 1921 text Psychological Types.
What’s your Myers-Briggs type?

Henrietta Lacks died in 1951, but she lives on through the cells named after her: HeLa cells. And also literally: they are her cells. These cervical cancer cells, harvested from Lacks while she was undergoing treatment—and without her consent—are the first continuously cultured human malignant cells and have been maintained for decades. HeLa cells are considered scientifically “immortal,” meaning that they can grow or divide indefinitely, and they have been used in thousands of medical experiments over the years, contributing to numerous medical advances. Lacks’s remarkable story was popularized by The Immoral Life of Henrietta Lacks by Rebecca Skloot, an account of the cells’ history and the issues of ethics and racism that surround it.

Often credited as a progenitor of the science fiction genre with her landmark 1818 novel Frankenstein, or the Modern Prometheus, author Mary Shelley is responsible for giving life to the term “Frankenstein.” In Shelley’s novel, the name belongs to Victor Frankenstein, the mad scientist who creates the so-called monster, but the word has since become synonymous with the monster itself. The term can also be used to refer to a creation that destroys its creator, or to a creator who creates such a thing. But Shelley’s contribution to language doesn’t stop there. Harvested from “Frankenstein,” the prefix “Franken-” can be attached to other words to indicate something disturbingly unnatural, especially something that has been genetically engineered or modified—like “Frankenfood,” for example.
Do you know of a woman’s contribution to the lexicon that has gone unheralded? Let us know!
Get all volumes of The Farlex Grammar Book in paperback or eBook.

The origins of tea and coffee names.
Read next 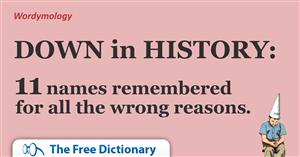 Down in History: 11 names remembered for all the wrong reasons
Feedback
Trending