Less common than similes, metaphors, and analogies, an allegory is a more specific type of comparison. You have may have heard this term used to describe a novel or film, but do you know exactly what it means?

What is an allegory?

An allegory is the representation of abstract ideas or principles by characters, figures, or events in narrative, dramatic, or pictorial form.
In an allegory, the story serves as a disguised representation for meanings other than those indicated on the surface. The characters in an allegory often have no individual personality, but are embodiments of moral qualities and other abstractions.

The allegory is closely related to the parable, fable, and metaphor, differing from them largely in intricacy and length.
A great variety of literary forms have been used for allegories. Although allegory is still used by some authors, its popularity as a literary form has declined in favor of a more personal form of symbolic expression

Among the most famous allegories is John Bunyan's Pilgrim's Progress. Written in 1678, it is a prose narrative and an allegory of man's spiritual salvation.
Even earlier examples include the medieval morality play Everyman, which recounts the death journey of Everyman and personifies such abstractions as Fellowship and Good Deeds.
The poem The Faerie Queene, besides being a chivalric romance and a national epic, is a commentary on morals and manners in 16th-century England.
Do you think any modern films or novels are actually allegories?
Get all volumes of The Farlex Grammar Book in paperback or eBook. 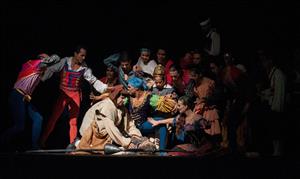