6 food words you didn’t know were filled with salt

Watching your salt intake? You may want to avoid these salt-heavy etymologies.

You might not taste it, but salad is always salty. “Salad” comes from the Vulgar Latin word salāta, meaning “having been salted.” The name may seem like a strange choice for a dish of leafy greens, but it most likely refers not to the salad components but to the highly seasoned dressings that often accompany them.

Unlike “salad,” this is one salty name that readily makes sense. Salt is a key ingredient in the making of sausage—both the food and the word. “Sausage” comes from the Late Latin word salsīcius, meaning “prepared by salting,” which it quite literally is.

But the salt-sausage link doesn’t end there. “Salumi,” the general name for several kinds of cured Italian meats (such as prosciutto), is also based on the Latin word for “salt.”

And one specific variety of salumi also owes its name to “salt”: salami. The word “salami” has its roots in the Latin term salāre, meaning “to salt.”

Chefs are taught to add salt to their sauces a little at a time to avoid adding too much, but what happens when the sauce is made from salt? Because, etymologically, it is. “Sauce” comes from the Vulgar Latin word salsa, which is ultimately derived from a word meaning “salt.”

That Vulgar Latin salsa is also the root of the salsa into which we dip our salty chips. Fittingly, salsa means “sauce” in Spanish. And now we’re hungry.
Don’t be salty—pass the salt facts on to your friends!
Get all volumes of The Farlex Grammar Book in paperback or eBook. 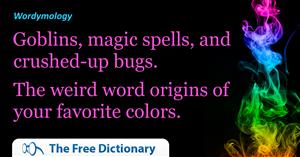 The weird word origins of your favorite colors
Feedback
Trending